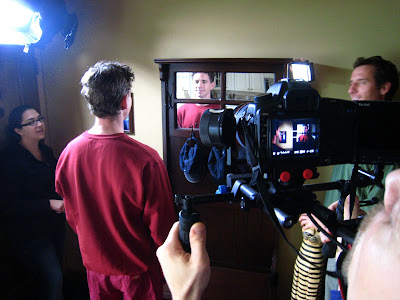 Matt wrote a great 1-page short story back in 1991 or 1992 (long before I met him) for a class at Stanford. Well.. today it became a film! Brian Dietzen (NCIS) is playing the lead role of Seymour, Ignacio Serricchio (General Hosptial/ Ghost Whisperer) is Rufus and I'm Sally! Jim Hanks cancelled his trip so that he could be around to play the doctor (thank you!!!) and Katrina was the receptionist. We shot it right here in our home. Matt was the DP, Traci Glodery co-produced , Imre was gaffer and grip, and Ryan did sound/PA, Violetta did make-up...and we had a blast! I had our lunch catered by Pitfire Grill, one of my favorite local restaurants. and it rained the whole day! But we did it! What a fun day!! Can't wait to start editing...
Posted by BAER THIS IN MIND at 2:11 PM No comments:

Someone is getting STALKED in NYC 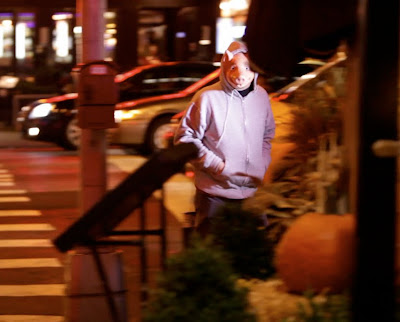 Matt and I were in New York City for a gig this week (for the third time in 2 months!), and I REALLY wanted to shoot something. I put out a call for scripts, but nobody responded. So Matt came to the rescue and wrote me a REALLY GREAT 5 minute short! We spent 3 nights with our DP friend Jenny Ramirez running all over the city grabbing shots with our Canon 5DMarkII, and came up with a great little project with fantastic production value, considering it only cost about $100! We shot at the hotel we were staying at in Times Square, and found locations in a Bodega, Times Square, an outside Cafe, the subway and an elevator.

My favorite fun fact about this project is that for the score, we ended up using a piece that Matt had composed and performed in 1994!! We transfered it to the computer and it worked perfectly --16 years later!! good fun. I love this short film so much!!
Posted by BAER THIS IN MIND at 2:10 PM No comments: