Come see me at Vimeo! 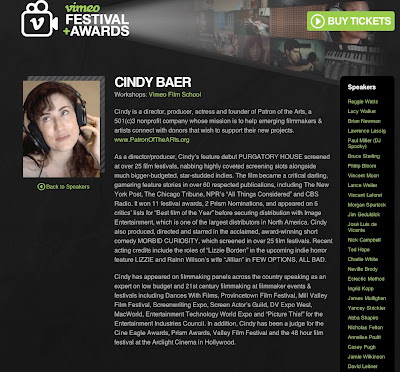 Posted by BAER THIS IN MIND at 3:20 PM No comments:

Bloomspot (that awesome company that offers great discounts on everything from dining to get-aways- to spas --to gifts) is having a fundraiser for POTA! Please donate 5 seconds of your time to sign up for Bloomspot's awesome free newsletter. For EACH person that signs up before 8/25 at midnight Bloomspot will DONATE $5 on your behalf! So far we've raised $525!!!! Woo Hooo!!! THANK YOU everyone!!! --EVEN if you already subscribe, please sign up below, because every time you buy one of their awesome offers, they will make ANOTHER donation to POTA! Bloomspot ROCKS!!! http://www.bloomspot.com/circles/patron-of-the-arts-la/

Posted by BAER THIS IN MIND at 2:10 PM No comments:

Labels: Patron of the Arts 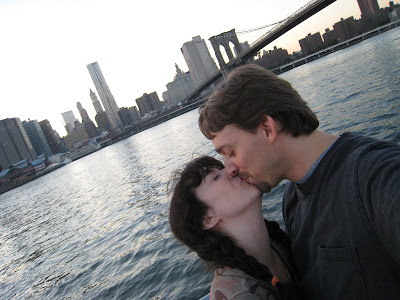 Well, here we are in New York City as a project I acted a lead role in called "Celibate Desires" just screened at the 48-hour film festival and won "Best of the Fest"! What an amazing year it's been for my acting! Roles in 2 SAG features and 3 short films! I'm also planning on shooting 2 more shorts before the end of the year. Life is good.
This week we're in the Big Apple (I'm working at the Canon Expo,which only happens once every 5 years!), and during the nights I really wanted to make the most of being in the city. So... we've seen 2 Broadway shows (Billy Elliot & Next to Normal), walked across the brooklyn bridge (pictured above), explored Chelsea Market and the High Line (a park that's elevated above the city and runs on the old railway) and had dinner at Fransisco Lobster (that has lobster claws from 30 pound lobsters hanging from the ceilings!)
We also took a trip to Vimeo (you know that really cool community site for filmmakers) and had a blast in their awesome building. It's an architectural stand out, and was modeled to look like a sail boat! Their offices feature ping pong tables (yes, we indulged), a light bright (with a giant "V" in pegs), free concessions (all the junk food you could ever imagine!), and the coolest view of the skyline overlooking the cityscape and the water, complete with telescopes. What an amazing place that must be to work. It looks like Matt and I will be coming back to NYC in 6 weeks to be a part of the Vimeo Film School. Of course this is right up my ally, since I love to inspire filmmakers, and share tips.
Posted by BAER THIS IN MIND at 11:25 AM No comments: