3 out of 6 Ideablob winners are TFA Alums

November's Ideablob winner was just announced, and surprise, surprise, it's yet another TFA Alumnus.  That makes the winners of the June, August and November competition ALL TFA beneficiaries.  You may remember that Ideablob created an incentive back in June (right when we lost the grant the FIRST time because our entry was sabotaged by Jessica Hammock of Project Epiphany, a TFA Alum) that if a TFA Alum won their monthly $10,000 contest, the TFA Organization would receive a separate $5000 award.  (Ideablob denies this, but we have evidence.)  Now, to date, 50% of all the winners since this financial incentive went into effect have been TFA Alums.
Here is what you can do if Ideablob's TFA bonus incentive has adversely affected your win: You can contact your state's Attorney General, as well as the USA Attorney General, Make a claim with the Better Business Burrow, File a complaint with the FDIC (they regulate the activities of banks) and lastly, of course is private litigation. (Unfortunately, lawyer fees will likely cost as much as the amount of the injury.) And, of course, if enough people have been effected by this, it could be classified as a class action suit.
Sometimes justice is believing in karma --knowing that what goes around comes around.
Posted by BAER THIS IN MIND at 10:29 AM No comments:

Labels: Lighten up the Darkness, Patron of the Arts, The amazing internet

According to Variety: SAG's moderate wing plans to replace the guild's negotiating committee -- and possibly fire national exec director Doug Allen -- in hopes of breaking the contract stalemate with the majors.

While much of the town's been shut down for the past two weeks, SAG's internal firefight over its divisive strike authorization vote has escalated. Allen and SAG president Alan Rosenberg have spurned calls to ditch the authorization vote but agreed Dec. 22 to delay it until after a Jan. 12-13 emergency meeting of the national board in order to present a united front to members.

But the moderates have grown increasingly frustrated by what they perceive as a lack of response from SAG toppers and are poised to begin moving to make SAG more pragmatic -- three months after gaining control of the 71-member board over the more aggressive Membership First faction, which still dominates the negotiating committee.

Ned Vaughn, spokesman for the moderate Unite for Strength faction, said he could not comment on specifics of steps to be taken at the meeting. "The board has a choice to make -- either go ahead with the strike authorization vote or move in a new direction," he told Daily Variety. New York board member Paul Christie said Allen may be on thin ice if he doesn't change his approach.

"His idea of re-establishing consensus to date has been 'getting you all to agree with me,' " Christie added. "He will go down in flames if that is his game plan for this meeting." But SAG First VP and negotiating committee member Anne-Marie Johnson told Daily Variety it would be "undemocratic" to call off the strike authorization vote and not allow SAG's 120,000 members to make the decision. Johnson also criticized Allen's critics. "To want to fire your lead negotiator, whose only fault is that he's trying to get the best possible contract he can get, baffles the mind," she added.

SAG's New York board, now in open rebellion from Allen and Rosenberg, first called for the cancellation of the strike authorization vote and the replacement of the negotiation committee on Dec. 12. A new negotiating team would probably attempt to restart negotiations with the Alliance of Motion Picture & Television Producers, which made its final offer on June 30, the expiration date of SAG's master contract on features and primetime.

SAG, led by Allen and Rosenberg, held 46 negotiating sessions with the AMPTP since April but refuses to relent on key new-media issues. And Allen, who's starting his third year as SAG chief, has become a polarizing figure over how he's handled SAG's strategy on several fronts: 1) Efforts in 2007 to force AFTRA to reduce its participation in joint bargaining, which led to AFTRA splitting angrily from SAG and negotiating its own deal 2) An unsuccessful campaign to persuade dual SAG-AFTRA members to vote down the ratification of AFTRA's deal. 3) The inability to close SAG's deal with the AMPTP, even after a federal mediator joined the process in October. Two days of talks cratered after SAG deman congloms ded a hike in DVD residuals -- long a nonstarter for the 4) His latest assertion that while he's hoping a strike won't occur, it won't shut down the industry since work would continue on indie features with SAG waivers and on cable shows and commercials.

That declaration, made Tuesday in a message to members, was met with incredulity by Christie. "If you are constantly telling the members no way will I shoot the gun I am asking for, then why are you begging for bullets?" Christie added. "These emails are astounding in their similarity as if they will wear down the membership by their sheer volume. Honest fact is, if Doug 'no way' Allen really wanted a strike authorization, he should have, according to any knowledgeable labor negotiator, asked for it July 1st." Christie also accused Allen of stalling on negotiations until after the September elections in hopes that Membership First would retain control of the national board.

The AMPTP also blasted back at Allen on Tuesday. "Today's SAG statement suggesting that a SAG strike would not have a devastating impact on our industry, in the midst of the greatest economic turmoil since the Great Depression, simply defies reality," the AMPTP said. "The 100-day writers strike -- which resulted in the writers receiving the same terms that the DGA achieved without a strike -- cost our economy $2.5 billion. A SAG strike would cost the working families who depend on our industry even more -- at a time when everyone is already under extreme pressure by the unprecedented national economic crisis."

The moderates have rallied behind a Dec. 2 letter by Danny DeVito and Rhea Perlman contending that SAG needs to accept a deal along the lines of the final offer, which contains similar terms to those in pacts signed in 2008 by the WGA, DGA, AFTRA, IATSE and the casting directors. More than 1,800 members have come out against the authorization including Tom Hanks, George Clooney and Sally Field. Nearly 3,000 members have signed a solidarity statement supporting a "yes" vote, including Martin Sheen, Ed Asner and Mel Gibson.
Posted by BAER THIS IN MIND at 7:24 PM No comments: 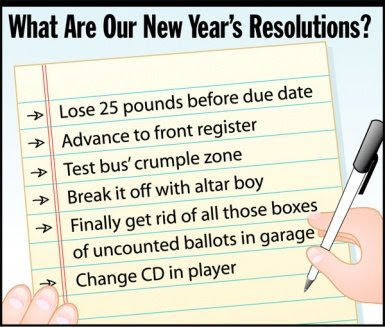 I'm making my list. Have you got yours?
Posted by BAER THIS IN MIND at 12:17 AM No comments: